I just got back from the Long Beach Comic Con and I wanted to express my sincere thanks to everyone who picked up a copy of Adventure Van from us at the Golden Apple Books booth. Ryan Liebovitz and his family and staff were incredible hosts all weekend and really go out of their way to make their creators feel welcome. I also got to spend some time hanging out Michael McMillian, my writer and the creator of Adventure Van and that’s always fun. Other than him working on sets in Hollywood and me working in my garage, we’re pretty much the same person. I also got the chance to drink at the Chez Jay for a bit, which was cool because I really enjoy GOLIATH on Amazon. Check it out. Lastly, please, please, pre-order and back-order Adventure Van from your local comic shop if you would like a copy. Most retailers only order the most popular books and a small press book like ours needs vocal people to order it. Thanks!

This past weekend I took up a last minute offer to go Wonder Con in Anaheim. It’s a show I’ve never been to and it was a relatively short drive of six and half hours across the Mojave Desert. I did not have a table or even properly set up for the show, I only went for Saturday but was able to squat at my publisher’s booth for about 4 and half hours that afternoon. I rented a super sweet Ford Fiesta and left my house at 2am to make sure I was there in time for my publisher’s panel that morning.

The main reason I went was that Golden Apple Books was launching their new publishing line and I’m an artist on the book, Adventure Van, which will be coming out late summer. They had a panel announcing their new line-up in the morning, and then I did a signing of a free preview copy along with the writer and creator, Michael McMillian. Most people know Michael through his acting work on shows like True Blood and Crazy Ex-Girlfriend, but he also a published comic book writer with credits at Archaia and IDW. The panel and signing went great, I sold some artwork and some trades and met some cool people like Darick Robertson, R. Eric Lieb, Richard Fairgray, Michael and Dan Fogler, who plays Jacob Kowalski in the Fantastic Beasts movies. Golden Apple Books was a fantastic host and they really treat their creators well, and I’m proud to be working with Ryan and Matt. The vibe inside Wonder Con as really great and not nearly as overwhelming as their sister convention in San Diego. The drive between Kingman and Barstow is beautiful and the road are absolutely pristine, I highly recommend the straight-out-of-1973 lounge in the Anaheim Clarion, a creator dinner and drinks session was a highlight of the trip. 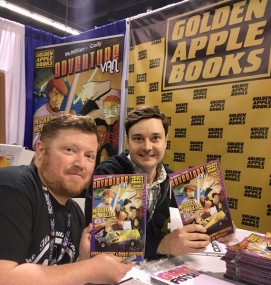 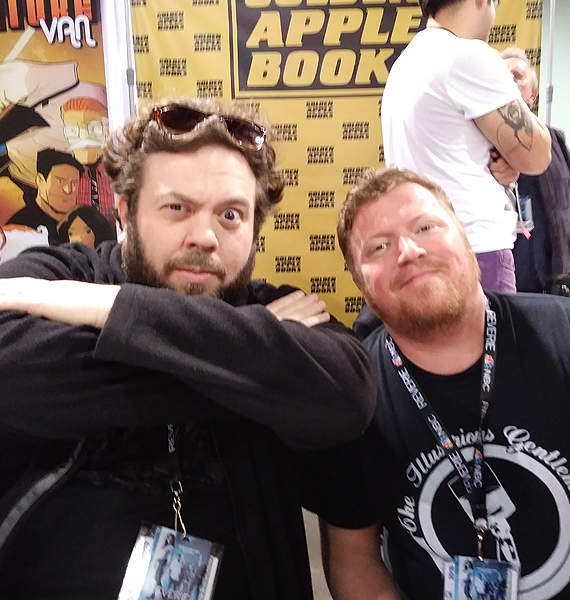 As many of you know, I co-host The Illustrious Gentlemen podcast along with my pal Scott Godlewski and I wanted to pop in and say that we’re currently running our 2018 fundraiser to cover production costs. You can check it out at https://www.kickstarter.com/projects/1123955719/the-illustrious-gentlemen-comic-and-booze-podcast

So, I love travelling, and I love visiting cool new spots and old favorites. In the next couple months I’ll be visiting Las Vegas and Albuquerque doing some filming for a project and visiting family. As far as comics go, I only have 3 appearances confirmed, but each one is something unique and I’m really looking forward to them.

September 28th-30th – Siouxpercon, Sioux Falls, SD. A new show for me and something I’m thrilled about.

Hopefully this is just the start to my travels this year. 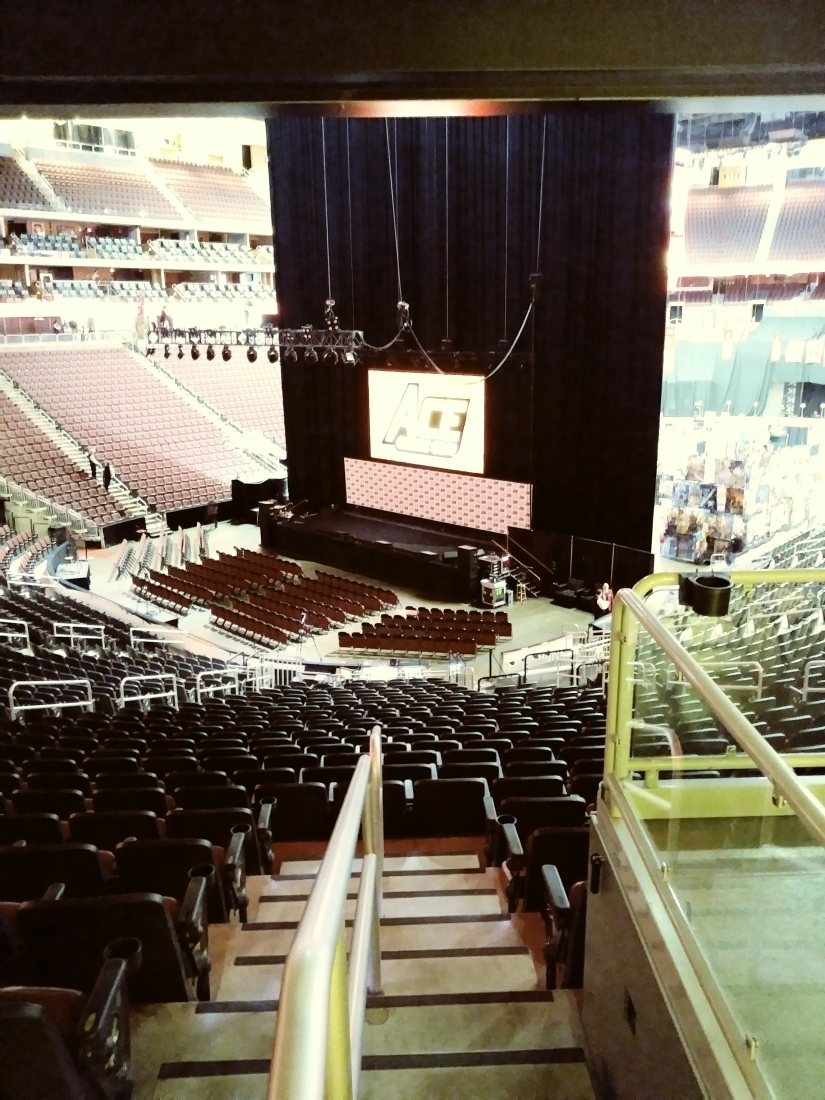 This past weekend I was a guest at ACE Comic-Con in Glendale, Arizona. It’s a new show, run by an old hat at show running, Gareb Shamus, previously of Wizard Magazine and Wizard World shows. This was their second ever event and first in Arizona. I have a lot of appreciation for conventions in Arizona, from Phoenix Comic Fest to Tucson Comic Con to my own 1-day Free Comic Book Day show, The Arizona Comic Mini Expo. While each may have its flaws, they all provide something I look for in a positive convention going experience.

Phoenix Comic Fest, while focusing much on the media guests, has dozens of panels about comics and still tries to bring in as many top tier comic guests as they can, and that show is always a #1 or #2 top earner for me when I table there. They have a proper artists alley (I hate that term) filled with creative people and they treat their guests very well. I’ll be there every tear they are willing to have me.

Tucson Comic-Con is still growing and in a smaller and less economically diverse market, so there isn’t the same money to be made at that show, but what it does offer is a great experience for guests. They treat their guests well and I can spend time with other professionals, enjoy the city, and relax a bit. Tucson is a wonderful town. I’ll be there every year they are willing to have me. I’m not going to talk about ACME (the show I put together), because of course I can cater that directly to what I love, comic creators.

ACE Comic Con was a very mixed bag. They leaned ALL IN on media guests. Sure, there were 4 or 5 big name comic guests, and I heard they did fairly well, but I don’t know how well the rest of us fared. To bring out 12+ high profile media guests and rent out an arena for the weekend must cost a huge amount of money, so that dictates that tickets to the event were well above $50 for a single day (much like a Wizard show). The layout for artist/vendor alley was confusing, there were comic guests mixed in with people selling metal sculptures and wallets. Some vendors were in artist alley, while others were on the arena floor, while some were on yet another floor above us. It was dark, some booths were literally in little alcoves where if you were walking and only looking straight you would never see them. There were no signs telling you what area of artist alley you were in (typically these would be row number signs). There were beer vendors and a really annoying lemonade vendor making the rounds and loudly yelling. As far as I could hear, there was no mention over the sound system about directing people to artist alley at all, and only a couple signs indicating where to go. Half the attendees looked confused and a huge portion were there only for the media guests and photo opportunities. Most had ZERO interest in anything that wasn’t what they knew from the movies.

I won’t get into why I personally did not do well over the course of the 3-day show. I don’t have the flashy prints and I haven’t worked on Marvel or DC books, so I get it. I will address some reasons I think many of us had problems. The high cost of attending and parking, with outrageous food and drink costs that come with being in an arena left many people with little spending money. There were a fair amount of empty hands. The confusing layout and lack of education about the event left many people bewildered. There were no programs created for the event listing the comic guests or media panels. Attendees had a single page map telling them what was on each floor. Not every convention feeds it’s guests, but many do, and that goes a long way in making you feel welcome. I’m sure all the media guests were fed 3 square a day. They are the reason people buy tickets, but it still is a poor look to not take care of your comic guests. That is something common in Wizard shows, so it makes sense. Another thing that I noticed they have in common is that guests were only given plastic wristbands (don’t take it off for 3 days!), instead of lanyards and a badge. A badge, with the word “guest” on it and your name goes a long way. Our wristbands said “vendor” on it, and the media wristbands were much nicer. Another odd coincidence is that I made the same exact amount of money at this 3-day show as I did at a Wizard World show two years ago, the only one I’d done in the last decade.

To be fair, I will say that because I was a guest at ACE, I was allowed to set up a table and sell my work at the Coyotes hockey game the night before the convention started and I did well that night. I am a Coyotes fan and I have Coyotes art prints that sold well to hockey fans. I would not have had that opportunity without being a guest at ACE, but it was separate from the convention proper. All in all I had a good weekend in that regard, but the 3-day convention was a chore. I like the idea behind what ACE wants to do, and make it an event more than a comic con, but re-brand in that case and just make it a media guest convention.

Wow, so it’s been a little over 4 months since I last posted, sorry about that.  Here is a quick update on my various, current, projects. I’m working on two graphic novels for release next year, one is an historical account of Joan of Arc for Tapestry Comics and the other is a science fiction/horror story that I can’t say much about currently, but I’m part of a great team over there as well. I’m also planning to return to work on my own comic, Fata Obstant Expeditions, next month, and issue 2 will be out in November. The book will be re-titled, AGENTS OF F.O.E., so be on the lookout for that. Issue #1 is for sale digitally at Comixology. A couple months ago Dark Horse Comics released The Complete Doc Unknown hardcover, over 360 pages of my work, and you can order that through your local comic shop, book store, or pick it up on Amazon.

My weekly podcast, The Illustrious Gentlemen, with up and coming DC Comics superstar artist Scott Godlewski, continues to soldier on and we have fun conversations and tackle some great topics. My other podcast I’ve been trying to get going, My Patronus is a Podcast has hit some roadblocks, but I hope to get that back on track soon.

One last thing, I’ve started a Threadless Artist shop selling t-shirts. So please, hop over there and check that out as well. Follow me on Twitter, Facebook and Instagram & since I’m primarily an artist, here is some art to save this long winded post, enjoy!

A new episode is up! I talk to Sina Grace this week. Learn how you can listen & subscribe over at the My Patronus is a Podcast page, or listen on Youtube.

My Tweets
Blog at WordPress.com.